Homeopathy – A Healing Method that Heals with “Nothing”?

How is it possible that homeopathic remedies already work in such small doses?

Strictly speaking, this question is not quite correct and testifies to a certain lack of understanding of the homeopathic healing method and its laws because homeopathy is not primarily about small doses. – Only the material substance of a remedy is described with regard to its degree of dilution including its expected chemical effect. – Instead, what matters are the dynamic potencies, which act on the basis of subtle information according to completely different active principles which are exclusively physical in nature. Presenting homeopathy as a healing method that heals with “nothing” is absolutely not trustworthy and exposes the presenter as ignorant. 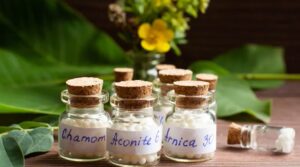 Basically, in the case of a homeopathic remedy, a distinction must be made between the information and the information carrier, two terms that are frequently mixed up. The intangible, intellectual information of the remedy is always related to a material carrier, for example in the form of lactose globules or alcohol in dilutions.

Let’s assume we produced two books that are completely identical in terms of size, weight, paper quality, ink, cover, bookmark, glue, etc., but fundamentally different in terms of their content; for example, one with the content of the Bible and the other with the content of the New York phone book. Materially speaking, we would have two completely identical books. Scientific analysis could confirm this down to the atomic or even subatomic level. Nevertheless, these two books differ considerably in their content, i.e. the information they contain! And that is what the reader really cares about. Shouldn’t it make a difference whether it’s the Bible or the New York phone book? Material analysis can’t determine which information is contained in which book! This can only be achieved with conscious thinking on a non-material level!

But let’s get back to the homeopathic potencies. Both the alcohol and the lactose globules form the information carrier. The specific information of the remedy, on the other hand, is released from the material by dynamization by means of gradual succussing or triturating of the starting substance with the neutral carrier and impressed on the neutral carrier as a kind of spiritual impregnation. Without the help of the living organism, such as with Kirlian photography, this will be undetectable in the laboratory. Only the carrier can be analyzed and measured; the information is irretrievably lost. This reminds me of an analogous statement made, I think, by the great medical doctor Virchow: “I have dissected hundreds of corpses, but I have never found a soul.” Nowadays, such statements make people smile.

Homeopathy, therefore, does not in any way only deal with the smallest doses, not even, mathematically speaking, with infinitesimally the smallest doses in the material sense, but with dematerialized, spiritualized remedies that transcend the laws of chemistry completely and act on a purely physical plane in the form of vibration and energy. To take a metaphor from today’s technology, homeopathic remedies are not unlike a radio signal that controls a space station weighing several tons as it orbits the Earth. There is not a single particle of matter in this radio signal; it is pure energy, pure information, yet necessary in order to achieve anything in the material at all, for example the ignition and switching off of the drive units to perform a necessary course correction for the orbiting satellite. In other words, the energetic micro-details cause changes in the material. – Likewise, investigating the material content of homeopathic potencies in this context is absurd.

To put it in a nutshell: conventional medicine is based on the lowest common denominator of (material) chemistry used almost exclusively to suppress symptoms. Homeopathy, meanwhile, is concerned about the quantum energy level of physics to stimulate/reactivate the organism’s self-healing powers which then initiates and controls the corresponding lower-level chemical processes in the body.

The Biggest Truth More about the Author